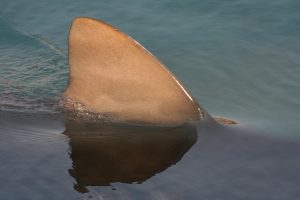 A break in the water’s surface tends to get attention. Beach goers scan the sea for breaching dolphins, sting rays amongst the waves, and of course, sharks. As an ocean lover, I am among those searching for a glimpse of sea life. Wading in the shallow waters along Florida’s Gulf Coast is a favorite activity of mine throughout the year, but I am not always pleasantly surprised by what I find. 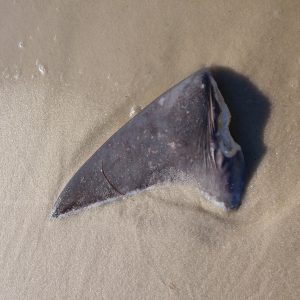 I’ve adored sharks since I was a girl, and sharing information about these misunderstood animals is extremely close to my heart. Sharks may appear to be imposing creatures, but only a select few species are actually aggressive; the remaining 400+ are essentially docile and curious. That has not changed the fact that their numbers are dwindling due to overfishing, bycatch and finning. During my last walk in the shallows, I was not excited, but deeply saddened to see a fin in the water. Though I don’t know the exact circumstances that led to my finding this discarded shark fin, I fail to see a positive perspective. 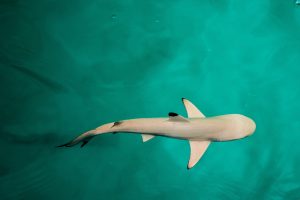 However, I am hopeful that public opinion concerning sharks has begun to shift. Because people are more aware of the decline in shark populations, proactive regulations have been developed, but monitoring and enforcement remain persistent problems. Much is left to be done with the threatened extinction of several species, but one particular activist was dedicated to the cause and enlisted the help of like-minded individuals to get the word out. 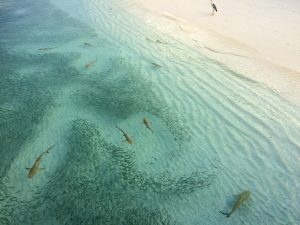 Rob Stewart was a Canadian scuba diver and shark conservationist who spent his life bringing attention to the plight of sharks. His first film, Sharkwater, was released in 2006. It explained the importance of sharks to the ecosystem and investigated the mass destruction of shark species being conducted by humans. The film won several awards, created awareness and spawned conservation efforts like nothing before it. Rob’s final film, Sharkwater Extinction, was released in theaters this month (October 2018). In another powerful documentary, Stewart further explores the finning industry, the ways sharks are being used in products for human consumption, and the ever growing threat of extinction. In January 2017, Rob lost his life in a scuba diving incident off the coast of Florida during the making of this film. The team was committed to finishing what he started and worked to complete the movie following his untimely death. Please honor Rob’s legacy by watching the films to become more educated about these extraordinary animals.