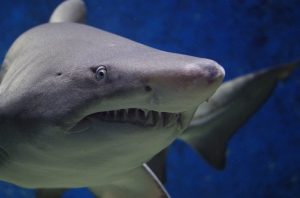 A well balanced ocean requires a wide array of species to be present, from those at the top of the food chain down to the bottom. It may seem that some animals have an unfair advantage over others, but each level of the food chain has a function. The circle of life cycle continues because all things work together as a whole, just as in any system. If the balance gets upset, the dynamic changes, and the system ceases to function as intended. Sharks are one of the ocean’s primary predators, and there are 440 different species of sharks known, each of them differing at least slightly from the others. Despite being an apex predator with essentially no natural predators in its home environment, sharks have fallen victim to human impact on a large scale. Based on reported catches, shark finning and discards, and considering the average weight of sharks, an estimated 100 million sharks are killed every year by human activity. 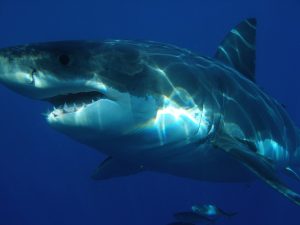 Shark finning and entanglement in commercial fishing gear are the main threats to sharks today. A study led by marine scientist, Demian Chapman, of Florida International University involved the purchase of 4,800 trimmings from nearly 100 vendors in the Hong Kong retail shark fin market – a city considered representative of the worldwide trends in the fin trade. DNA techniques sensitive enough to identify sharks from shark fin soup, cosmetics or shark liver oil were used by Chapman and his team to determine the prevalent species in the trade. They found nearly 80 shark, ray and chimaera species from coastal and deep sea areas – one-third of which are listed as being threatened with extinction by the International Union for Conservation of Nature (IUCN), the global authority on the status of the natural world. Chapman concluded that the market relies on a number of species to operate so that if one declines or disappears, the trade can then continue with others, and the vanishing species may go essentially unnoticed. The detailed study was published in the journal Conservation Biology.

Though overfishing is a significant issue, bycatch is also a major problem in the commercial fishing industry. Bycatch is the unintentional capture of a non-target species. Sharks are particularly susceptible to practices used by those fisheries in search of tuna or billfish. Skates, rays, and bottom dwelling sharks are most impacted by the use of bottom trawling equipment. The unsustainable shark finning trade, however, is the leading cause for the world’s shark population approaching the brink of extinction.

Loss of habitat, climate change and pollution are among other factors contributing to the decline in numbers. Sharks do tend to live long lives but mature late and have very few pups, so they are more vulnerable to exploitation than prolific species. The sheltered environments where sharks raise their young, like reefs and mangrove swamps, are often compromised by the factors noted above, too. These conditions make caring for their young, and finding sufficient food for themselves, very challenging. Their situation is rather dire, and the simple truth is that the overall health of our oceans is heavily dependent upon the presence of sharks at the top of the food chain; their existence is vital to the ecosystem.

Sylvia Earl – marine biologist, explorer, author, and lecturer – said it best, “Sharks are beautiful animals, and if you’re lucky enough to see lots of them, that means that you’re in a healthy ocean. You should be afraid if you are in the ocean and don’t see sharks.”

One thought on “Majestic but Misunderstood – Save our Sharks”